from When We Were Sámi

Scandiwegia and Finland enjoy very high status among laymen in western society, often portrayed as idealistic utopias by people who don’t know better. However, just as Britain has its dark secrets in its treatment of the Gaels in Scotland and the Welsh in Wales, so too do the Nordic wonderlands hide some unpleasant aspects of their history. Disney’s Frozen II took the idea of the Sámi people out into the world to a viewership who might not even be able to point out Norway on a map, but the Sámi have a long history of mistreatment by the mainstream cultures that the fictional events of a Disney film only scratch the surface of.

Unbeknownst to most people outside Scandinavia and Finland, Swedes, Norwegians and Finns are not the only people native to the region. The Sámi are a group of peoples with very close linguistic ties to each other and more distant ones to the Finns. Their ancestral homelands are Lapland and the Kola Peninsula in Russia, and further south in Fenno-Scandinavia. They began to diverge from their more southern neighbours around the time agriculture and iron arrived in the region, as the cultural changes these innovations wrought on the ancient Scandinavians and Finns largely passed the Sámi by.

They existed alongside their neighbours in relative peace for millennia, trading furs, amber and other things with Finns and Norse. However, discoveries of silver in northern Sweden and Norway put an end to that in the 1600s as northern Scandinavia was settled and colonised to capitalise on the silver reserves. Colonisation brought with it oppression, drafting, erasure, and forced assimilation, the effects of which are still very much felt by Sámi people today, with some older Sámi too traumatised by beatings and shame to even speak their native language in public.

This graphic novel tells the tale of a modern, middle-aged Swedish author struggling to connect to a Sámi ancestry and culture that was cut off generations earlier by oppression, colonisation, and forced assimilation into mainstream Swedish society by a state that wanted them to become a forgotten people.

It is into this history and context that Mats Jonsson leads the reader on his protagonist’s journey of coming to terms with his family history and his own ingrained inferiority, as well as detailing the Sámi’s history as the northern neighbours of the Swedes and Norwegians to underlings of their state and eventually to undignified, humiliating roles as exotic aboriginals. These three hundred pages of detailed, lovingly-drawn illustrations should be an eye-opener for the uninitiated as the author discusses the difficulties of connecting to and communing with a Sámi identity whilst also trying to integrate it into his life as a Swede. The result is a complex, melancholy, sometimes emotionally raw graphic novel that is a small step towards restitution and validation for Sámi and their descendants in the Nordic countries.

from When We Were Sámi 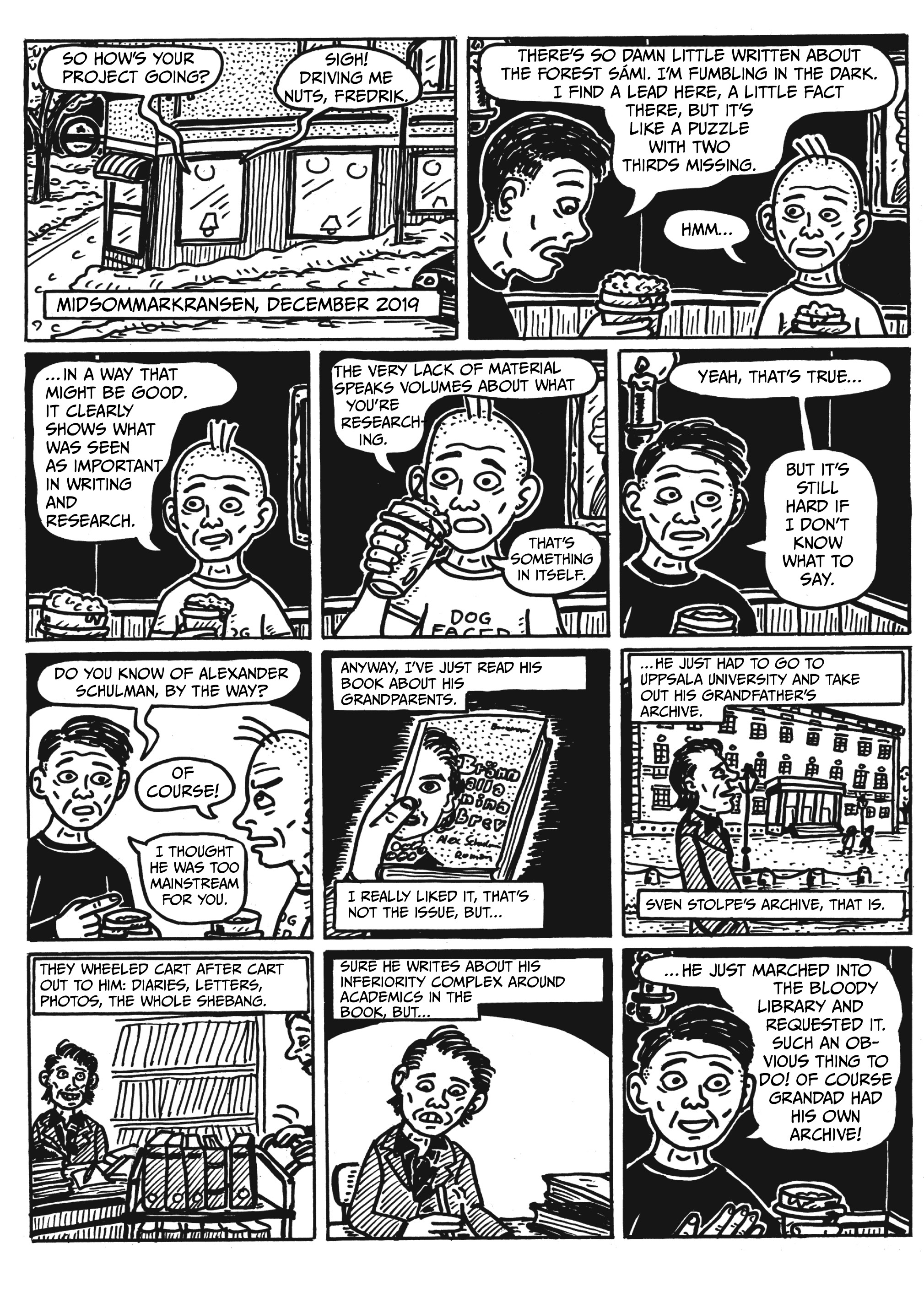 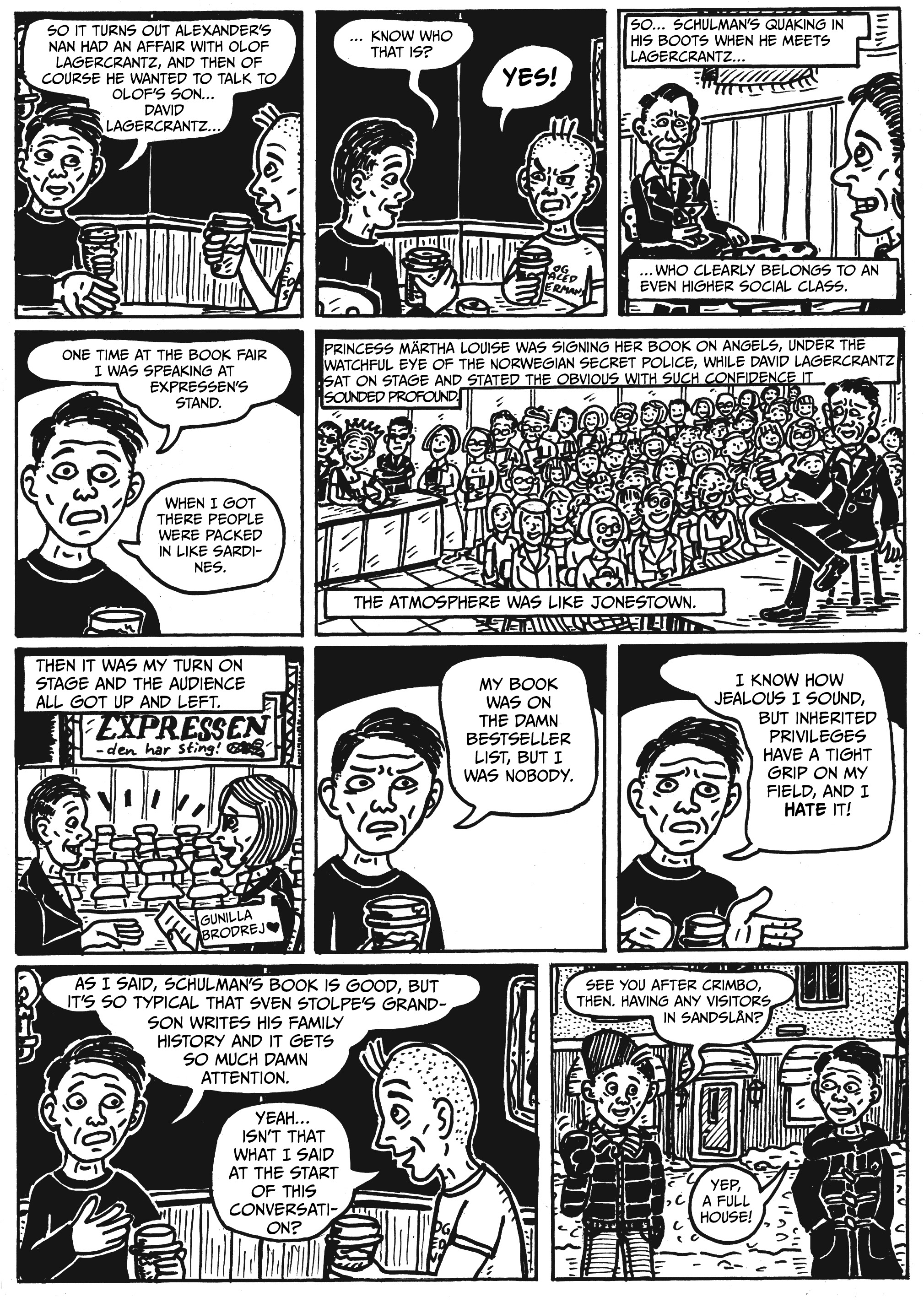 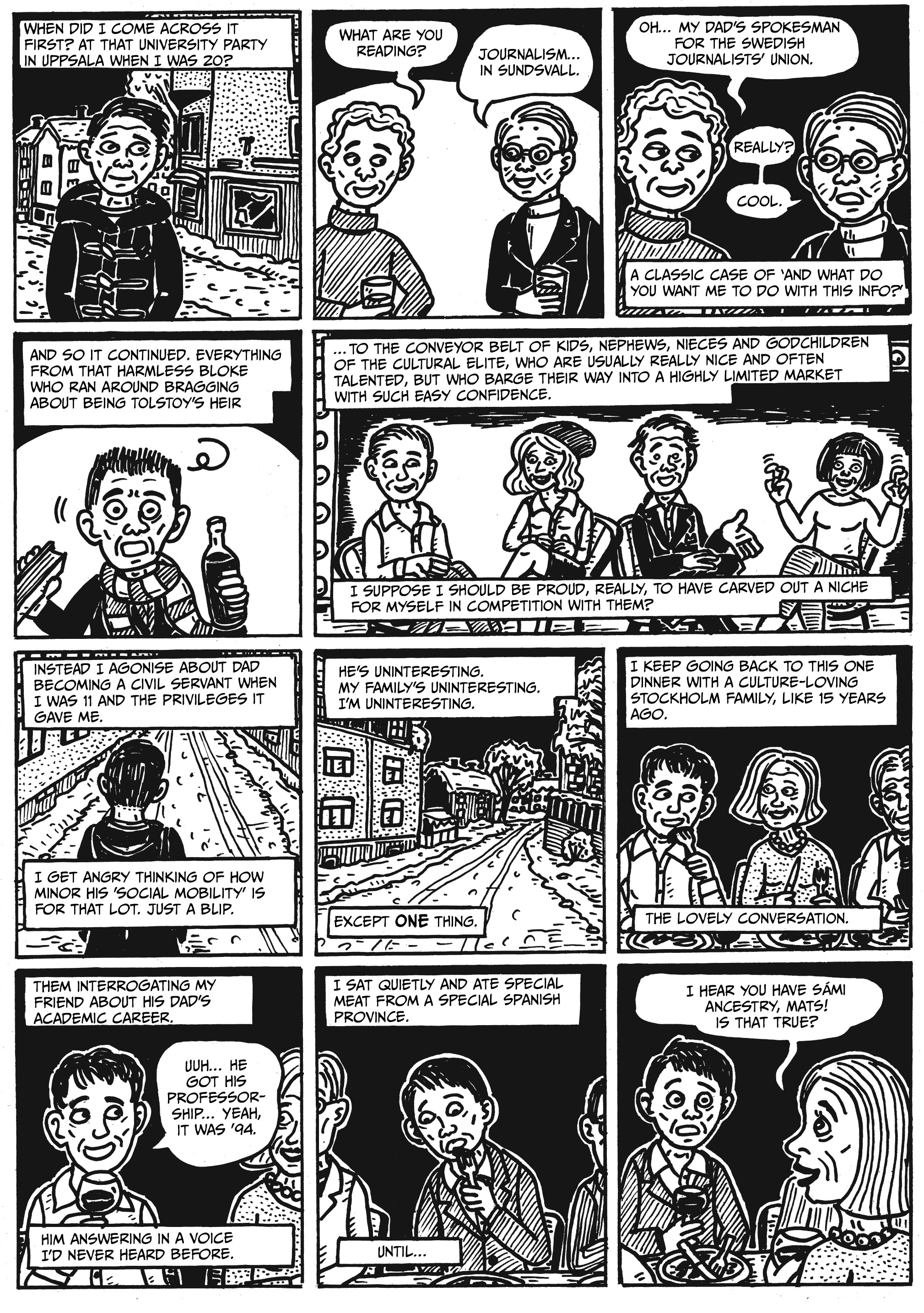 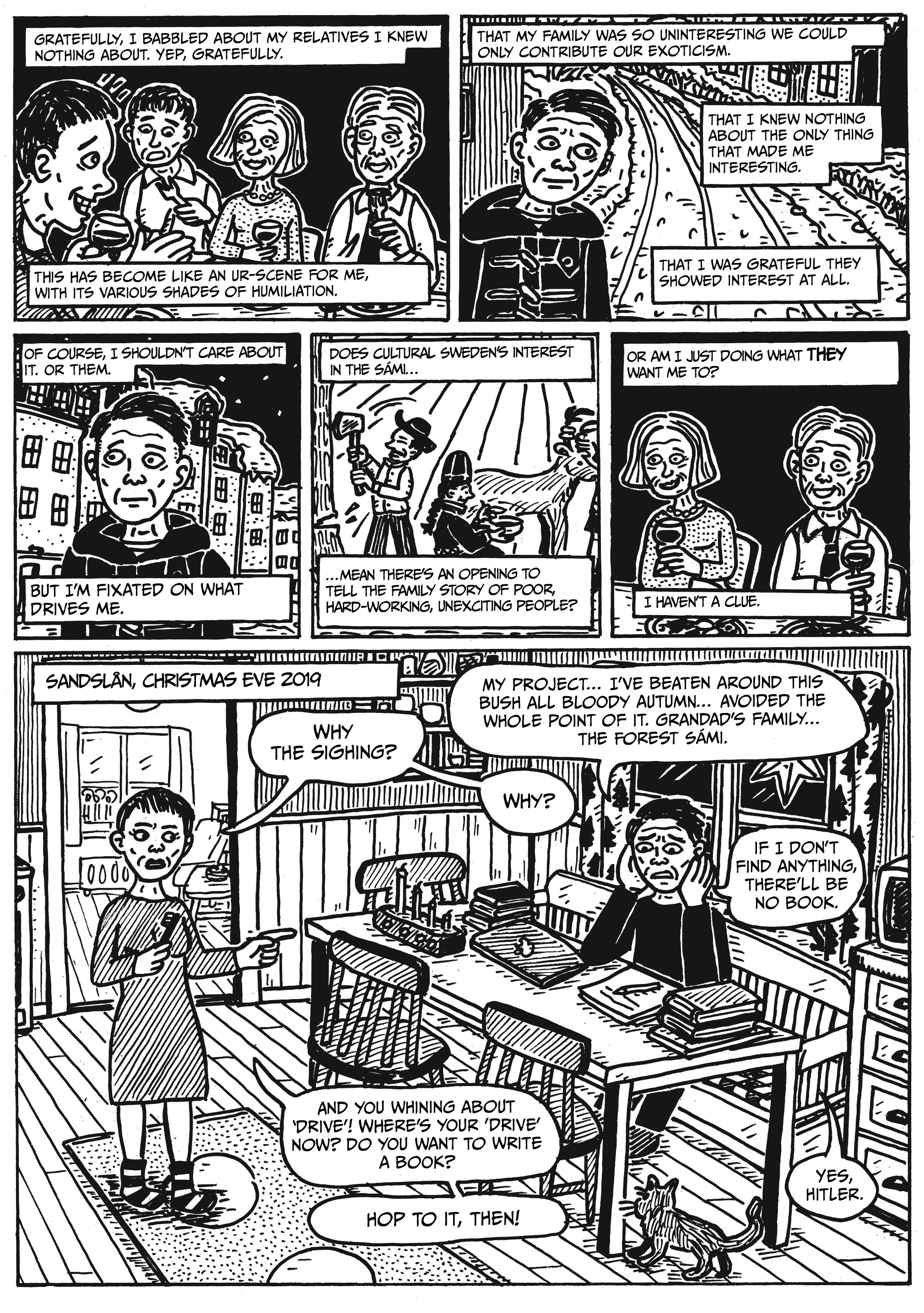 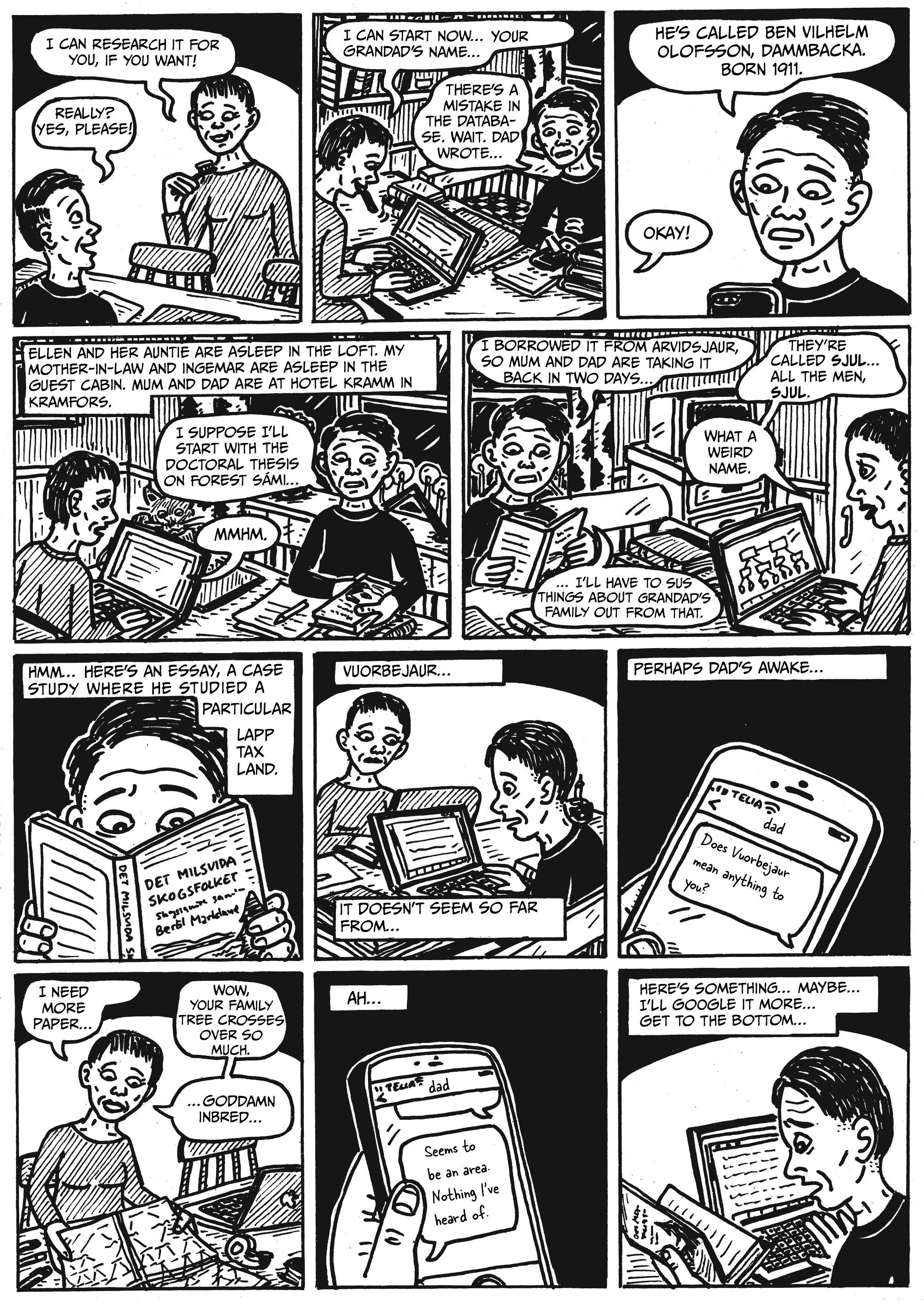 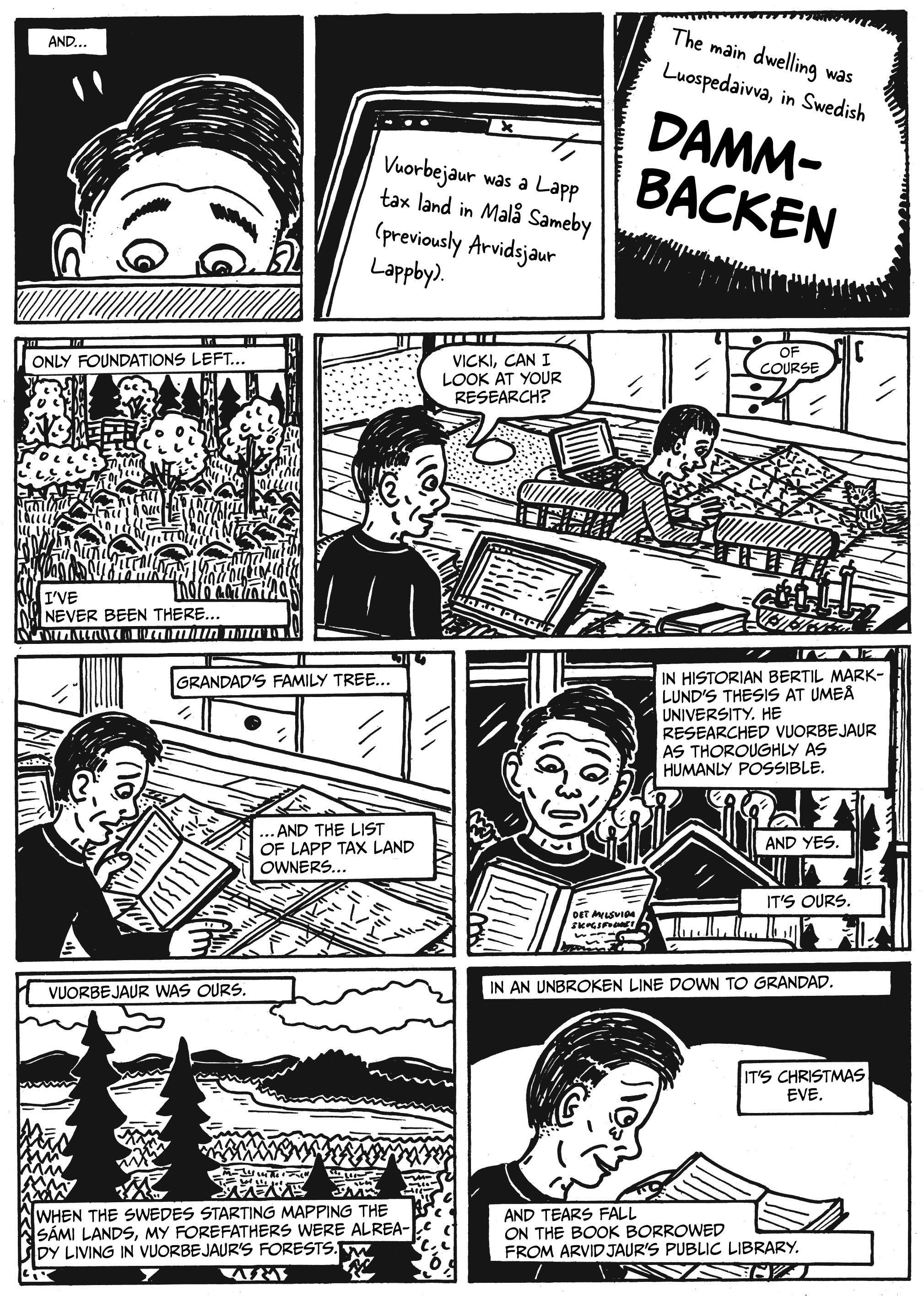 Translator's note: though a completely neutral term with no history as a slur or term of abuse in English, the word ‛Lapp’ is advised against in Swedish, Norwegian and Finnish, being associated with historical – and current – discrimination against the Sámi. It is used in this translation when in a historical context, but when discussing the present I have stuck with the moniker Sámi.

Nominated for Augustpriset 2021, in the literature category.

We are grateful to the publisher and author for permission to publish this translated extract.

Mats Jonsson has published a number of autobiographical works. He is a recipient of Sweden’s Urhunden award, given annually to the country’s best comic or graphic novel, and has twice won the Norrland Literature Prize.

Michael O. Jones teaches Finnish and Swedish to adults in Finland, and translates from Finnish, Swedish and Norwegian into British English. He holds a BA in Finnish from UCL and an MA in Scandinavian Languages from the University of Helsinki. He is a novelist-in-training who spends his spare time learning Scots Gaelic, knitting socks, writing analyses of a genre television show, and planning his own model railway.